And the Basic Instinct actor told Jimmy Kimmel during his late night show on Tuesday night that he will help the Spartacus legend celebrate another year around the sun. But it has to be low key. 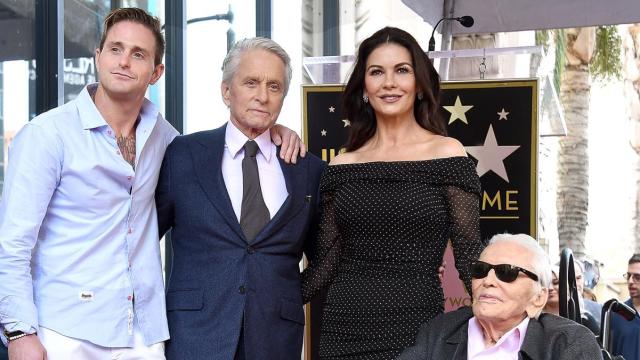 The iconic actor turns 103 years old on December 9. Despite his son Michael Douglas‘s wishes, Kirk is really hoping they let the day pass by without much fanfare.

Michael, 75, opened up about his father’s hopes during an appearance on Jimmy Kimmel Live! Tuesday night, where he admitted that Kirk is tired of the big parties they’ve thrown him in recent years after he turned 100 in 2016.

Michael said the same thing happened all over again the next year.

But Kirk is really hoping to break the cycle this year.

“So he’s begging me, he’s got tears down his eyes. ‘Let’s just have dinner, the family together. Bring the kids,’ ” Michael joked.

Kirk’s family has gotten together quite a few times recently with the centenarian. A recent family included Michael, wife Catherine Zeta-Jones and their two kids — son Dylan, 19, and daughter Carys, 16 — and his older son Cameron, 40.

In a shot of the gathering Cameron posted on Instagram, Kirk sits at the head of the table, wearing his now-signature sunglasses, while his wife Anne Buydens, 100, sits a few seats over from him.

Kirk and Buydens have been married for 65 years, and Michael admitted on Kimmel that she doesn’t like to be reminded of her age.

“She’s French and been lying about her age all her life,” Michael joked.

WHY ANDY RUIZ VS JOSHUA REMATCH IS TAKEN TO SAUDI ARABIA

BBNaija: Khafi wins N7.6m car as others fall for Pizza