Nigerian authorities have detained journalist Omoyele Sowore a day after his bail was upheld by a high court.

Images on Friday show Mr Sowore pinned to the floor during scuffles with state security agents at a court hearing.

The former presidential candidate and founder of the news site Sahara Reporters was first detained in August after he called for revolution.

Despite being granted bail in October, authorities have continued to hold him, sparking an outcry from his supporters.

His co-defendant Olawale Bakare is also in the custody of state security services.

In videos shared by Sahara Reporters, several men attempted to drag Mr Sowore from an Abuja courtroom where he had been summoned for a hearing. 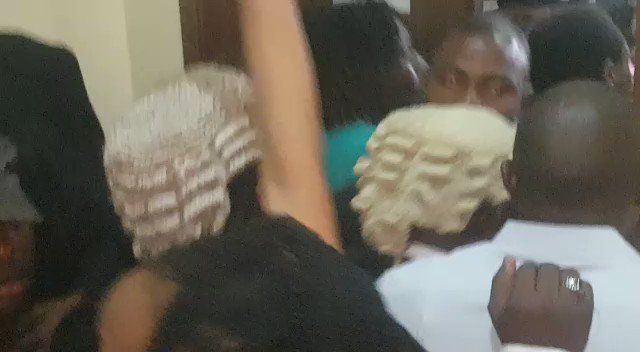 It comes a day after a court ordered that the pair be released by Nigeria’s Department for State Security (DSS).

Why has he been detained again?

The reasons for their detention have not yet been disclosed.

Their lawyer, Femi Falana, told AFP news agency that crowds had resisted attempts to arrest the pair and, in order to prevent further violence, he had personally driven them to the DSS’ headquarters.

Mr Falana said the DSS had told him Mr Sowore was needed for questioning and would be released later in the day.

“I can assure you what is happening now will not go away unchallenged,” Mr Falana told reporters. “We either run this country on the platform of the rule of law or we resort to gangsterism which is what is going on.”

No-one from the DSS was immediately available for comment.

What is he charged with?

Earlier this year, Mr Sowore called for revolution because he said Nigeria’s elections were not credible. That followed the re-election of President Muhammadu Buhari.

“All that is needed for a #Revolution is for the oppressed to choose a date they desire for liberty, not subjected to the approval of the oppressor,” he tweeted on 2 August.

One day later, on 3 August, he sent another tweet: “DSS invades Sowore’s.”

He has since been charged with treason, money laundering and “cyberstalking” for allegedly sharing false and insulting information about President Buhari. He denies all the charges.

Despite the granting of bail, the DSS continued to hold him in custody, saying no-one had come to claim him.

But Sahara Reporters said his lawyers had been denied access when trying to collect him from jail in Abuja.

His trial is due to continue in February.

CNN earlier spoke to Sowore’s mother — Esther Sowore — on Friday where she became visibly shocked as she learned of her son’s re-arrest.
She told CNN about the toll her son’s arrest had taken on her health. “I cannot eat, I cannot sleep. It is affecting my health. It has been four months now. I plea to Buhari again in Allah’s name, I plead to him to release my son.”
She also called on President Donald Trump to intervene and help free her son during the CNN interview.

UK Election 2019: The vote that could destroy the United Kingdom