Tyson Fury and Deontay Wilder both made bold promises at the first press conference ahead of their February 22 rematch.

The heavyweight pair renewed acquaintances on Monday in LA, with Fury declaring a two-round knockout is on the cards after Wilder claimed he plans to rip the Brit’s head off of his body.

“I will do exactly what I said I would do. I’m gonna knock him out,” Wilder stated.

“And come Febuary 22 we’re gonna rip his head off his body, remember I said that.

“I’m gonna knock you out the ropes so you can really feel a WWE moment in real life.” 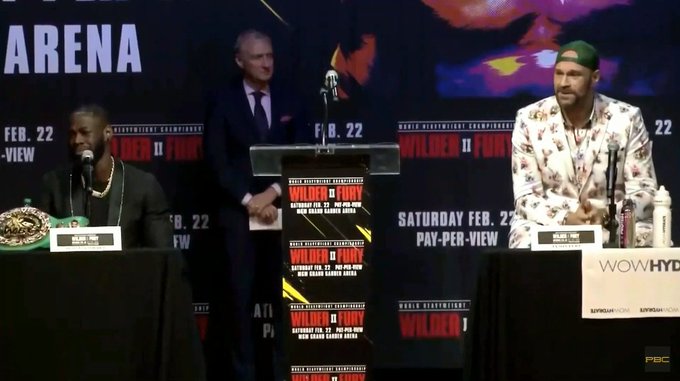 Fury later hit back: “I wanna meet him head on, ‘mano a mano’ in the centre of the ring.

“Let’s make it a Tommy Hearns vs Marvin Hagler type of fight.

“I’ll meet you Deontay in the middle of the ring, February 22, I won’t be running, you won’t have to look anywhere for me.

“Just watch out for the right hands because you’re going to sleep in two rounds.”

Tyson Fury makes a KO prediction for the Deontay Wilder rematch, Wilder responds with a not-so-subtle gesture expressing his doubts… 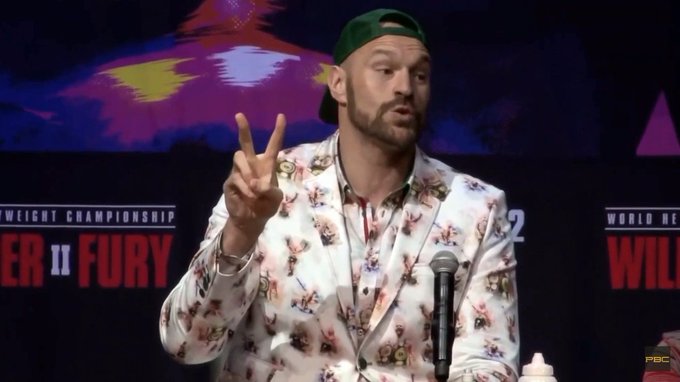 Tyson Fury leaned into the microphone and issued an audacious prediction to Deontay Wilder regarding their rematch.

Wilder replied by picking up his own microphone and sniffing it loudly, mocking Fury for his past problems with drug abuse, before also predicting a knockout.

When the two unbeaten heavyweights got together in Los Angeles on Monday night, they picked up right where they left off across the street in December 2018.

That thrilling split draw at the Staples Centre has led to a rematch on Feb 22 in Las Vegas, and both men are aiming to brutally erase each other’s perfect record in what is the most-anticipated heavyweight title fight in recent years.

While many felt Fury (29-0-1, 20 KOs) edged that bout, Wilder left him flat on his back in the 12th and final round, only for a stunning recovery to beat the count.

“I’m more prepared than ever,” Wilder said. “I told Fury two years ago I was going to baptise him, and I did just that. Rising up is part of the baptism. I told him he was going to go, ‘Timber’.”

And he did just that.

“This time around, it’s called unfinished business. He won’t be able to get back up. This time, I’m going to knock him out.”

The match-up is fascinating because it pits Fury’s technical boxing skills against Wilder’s ferocious punching power, which has made him one of the most-feared boxers.

This time, though, Fury is prepared to let his hands go, insisting he will go for a KO as judges will not favour him if it goes to a decision.

“I accept that,” he said. “Thinking I won the fight ain’t enough. I need to know. Thinking it doesn’t count. I need to end the fight.”